The first part of our ride today took us through the small hamlets of Warrenton and Round Top (population 90).  In the early morning the few buildings that made up the town square were quiet, but very cute.   The town appeared to be suffering a bit of a hang over, having just completed a 10 day Annual Antique Show.  The two tiny burghs population erupts to over 100,000 as people travel from all over to attend the show.

The remants of the event resembled a large, miles long tent city.  The Main Street, empty pastures, event centers,  front yards, roadside buildings, barns and stables all had empty tents.  A few vendors could be seen breaking down and packing up, and a few permanent shops/stores advertised that they welcomed guests!

The views for the day were very scenic – but the first 26 miles were on a very narrow and busy country road.  Trucks zipped by us causing a slipstream, and you had to hold on when they rumbled by us!  It was a relief to get onto a new road.

We cruised through the day, even with a strong and persistent North crosswind.   Spring time in this part of Texas is absolutley breathtaking!  Fields continued to be filled with Bluebonnets and Indian Paintbrush (the coral/orange flowers).  Cows grazed in green, green pastures and horses lined equestian farms and estates.   Many of the homes in this area were pretty spectacular. 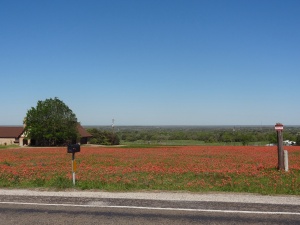 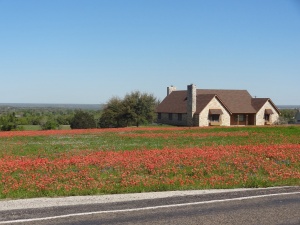 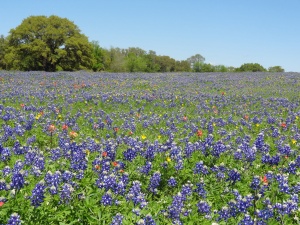 The only blight on the day was a minor mechanical problem that I encountered at mile 50.   We had stopped at small and very busy country store, and when I climbed back on  Sweet Ruby – something felt wrong.   Somehow, the post that held my seat on broke!   I pedaled the final 15 miles somewhat scooched to the front of my saddle, or shifted to my left side .  I was thankful there were not any significant hills or climbs, and stopped every 5 miles . 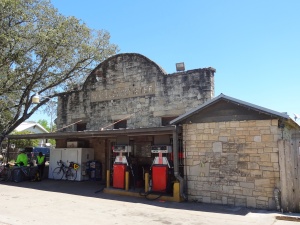 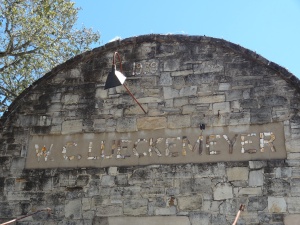 We arrived in Navasota which is a small town about 20 minutes from College Station, TX – Home of Texas A & M.  We have a rest day which I will use to get a new saddle.  Which will need to be broken in !! UGH.. just did that with my other one.   And for those that are curious – breaking the seat in, also requires breaking in your bottom !