Did it! Wow what a day. Beyond exhausted.

So thankful for our rest day yesterday as refreshed my legs, and gave me the strength that I needed to make it through today.

The ride today was beautiful, so although it was a hard climb – the road to and up Emory Pass was terrific.

Along the way we passed a rock structure called the Kneeling Nun, and another copper mine. 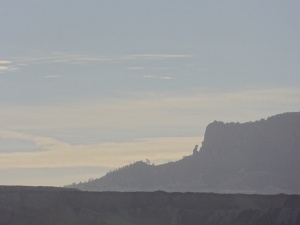 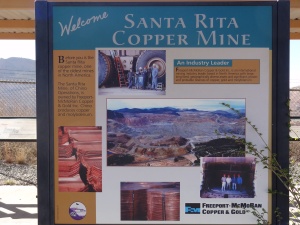 The first 22 miles had a few small climbs and rollers, then we had a 18 mile climb up through the Gila Forest and Emory Pass .  All that hard work was rewarded with an 8 miles descent.

During the early part of the day, I hit a downhill at 40 mph.  This was a long but straight  downhill.  It is exhilarating, until you come to a stop and and have to start climbing up again. 5 miles from the top, my legs were jello and I was working hard to move the pedals.  I was stopping frequently only for a minute or so to try and find life in my legs.  I walked for about a half mile in total- this helped to use different muscles for a bit and to make sure my brain and legs were still communicating.  Breathing was getting a bit harder as we were nearly at 8000 feet.  I have not had any problems before, but I was exerting myself a bit – and my lungs were in need of more air.  A mile and a half before the top the SAG swung down to see how we were doing.  I have gave them the thumbs up that I was going to get to the top.  Somehow.  Nancy the SAG driver turned around, and shouted that i only had a mile to go and she would be there when I got to the top.

By this point I was calling on my angels and all heavenly bodies as well as Santa Claus and the Easter Bunny to help me get to the top.   For hours I was churning at 3-4 mph – but this last mile, somehow a slight tailwind rose up and I was moving at 5.  The final climb was torturous for me, and I was alternating between breathing and weeping.  By the time I made the final few feet to where Nancy was parked (and she and two other riders where cheering me on and waving me up) I was at full blown sobbing.  Relief, exhaustion, and a flood of other emotions washed over me.

We took a few pics, walked up to the scenic vista and I took a deep breathe as I looked across the vast and  beautiful New Mexico landscape.    I took a few minutes, and then started my descent down.  The road was twisty and had lots of turns, no guardrail and a deep canyon to the side.  The good news was there was little or no traffic- Once the SAG vehicle passed me – I was the only person on the road.

Time to log off and get to bed. 88 miles tomorrow