There were several choices for today’s song title, but the simplicity of this said it best. Hat tip to SY for the recommendation.

Each evening after dinner we meet for a preview of the route for the next day.  Our map meeting discussion for today’s ride had one theme, and one theme only – when you leave Alpine – you go up, up, up.   There was no mention of the wind however, and that meant that in addition to the up, up, up part, it also meant you went slow, slow, slow. 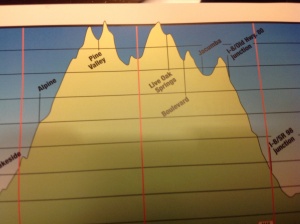 Alpine to Jacumba Started at 2000 feet topped 4000 feet. and yes, we rode across all of those roller coaster hills.

The morning routine includes bringing your bags to the trailer and packing them in the trailer, putting air in your tires, eating breakfast (typically standing up in the parking lot – unless it is a hotel breakfast) and then packing snacks from the snack table.  Then it is go time!  Everyone pretty much trickles out when they are ready to go.

Most of us were ready to go bright and early, and there seemed to be a bit of anxiety from the group for the ride ahead.  Of course, that anxiety could have been all of my own – but I do think there were a few others that felt the same way.  The thought of a day with may significant climbs was a bit overwhelming for me, but it was time to roll out and as my friend Adam encouraged me to “Embrace the Suck”.  Not only did I Embrace the suck, I kissed it,  and married it by the end of the day.

The first 13 miles took me 4 hours.  Yup, you read that right – 4 HOURS!  Between the climbs and the winds, and oh, baby, did those winds blow!  I (we) were crawling.  As part of route today, we actually road on a California Freeway – I-8 (oh wait, I’m sorry.. THE I-8.. little California freeway humor for you..)   Total miles on the freeway?  3.4 miles.  Total time on the freeway – 1 hour.  The freeway did have a wide shoulder – so that was great — but I will say that after viewing the debris on the roadside (which consisted of glass, bolt, nails, screws, etc) I will never, never, ride behind a truck with a full load.  I didn’t realize how much stuff bounces off of them, that is suppose to be securing the load! 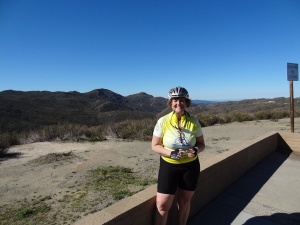 Everyone on the ride has been incredibly supportive and for the fun on the freeway I had a great riding companion.  We were the last two to check in at the SAG (vehicle parked with drinks, food – where we check in)  We made a quick stop for some red twizzlers- which I have been told have magical powers that will help me climb…hmm… and we were off – as the harsh reality that after 4 hours we still 30+ miles go.

I had several mantra’s rolling through my head today, one I recited at every mile, and often within that mile.  This Mantra came in the way of advice from one of my fellow riders husband yesterday morning before we rolled out.  He was an experienced cyclist, and had completed a cross country trip.  I asked him what would be the one piece of advice that he had for us as we set out, based on his experience.  His advice was “you are stronger then you think”.   Say that 50-75 times over the course of 8 hours – and somewhere along the way you start to believe it  (Thanks, Carl!)     The second Mantra was “one mile, one mail box, one pedal at a time. ” And finally the third was “F*&*^ off Mr. Wind!”

We stopped at a cafe  around mile 20, and it was recommended to have the pie.  I had sandwich (but a bit of pie right about now sounds appealing)- I was starved, and realizing I still had miles to go, I thought it was best to fuel.  Good thing we did as we still had climbing and wind to deal with. I do not have the exact speed of the wind gusts – but one of the women was blown off her bike today.  She is fine, but she has a bruised hip!  Yikes.  There were gusts of wind, and sections of road that we walked up – it was faster than trying to ride with the wind pushing you back.  C-r-a-z-y!

We also saw a lot of Border Patrol activity. There were Check points and the big bad fence.  Somewhere in all the planning and viewing of the itinerary, I missed that fact that we are so close to Mexico while we are in California.  I was expecting it in Texas, but not here. (hey, Joe C- Check it out on the map – I know how you love maps!)

Good night everyone and thanks for all of your wonderful support and encouragement – it means the more than you an ever know!!!